One important eucalypt species that fringes riverine systems in southwestern Australia is the river gum or  flooded gum, Eucalyptus rudis. It is a relatively fast growing and long-lived tree which thrives and survives in waterlogged sites with heavy, acidic soils and tolerates salinity. Which is a bonus since these are the conditions along river banks such as those along the Swan River. At maturity it can reach 30 m in height and serves as important habitat for invertebrates, mammals and a vast array of birds. From southern boobook owls to striated pardalotes to rufus night herons,  many a bird will roost in the branches or seek a nest in tree hollows.

Growing on unstable and eroded river banks does pose some risks, so when some severe storms affected the Perth region last June, many established trees were simply knocked down like matchsticks. Including this one at Burswood. 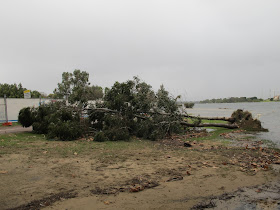 I grabbed a branch of nuts and sowed them in native seed raising mix, to them highly germinable within a few weeks and myself saddled with loads of seedlings (in clean soil [commercial brand meeting Australian standards] and pots, I'll add). 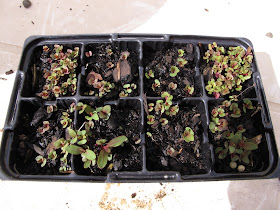 So - what to do... eight months on - it's been a slow, stealthy mission to plant out saplings along the river. Some saplings have been pulled up (ones marked with flagging tape), but the others, planted with stealth, remain in place and hopefully will grown on into magnificent trees. However, infrequent and ad hoc plantings will in no way arrest the severe, state-wide decline in Eucalyptus rudis, which is part of an overall woodland and forest tree decline in the face of threatening processes such as Phytophthora, insect defoliation and drought.